The ACS Department of Research and Member Insights is out with the initial 2012 ACS Salary Survey data. In a C&EN story written by Rudy Baum, the results were reported yesterday:

Although still high by historical standards, the 4.2% unemployment rate for ACS members is well below the 8.2% national unemployment rate in March reported by the U.S. Bureau of Labor Statistics. That rate was down from 8.9% in March 2011.

According to Elizabeth McGaha, manager of the Department of Research & Member Insights in M&SA, this year’s salary and employment survey showed that 90% of ACS members were employed full-time as of March 1, 2012; 3.2% were part-time, and 2.6% were in postdoc positions. More than 7,000 ACS members completed the survey, which was conducted with domestic regular members younger than 70. No students, emeritus, retired, or international members were included.

It ain't that great, I think: Among the different qualitative comments in Mr. Baum's article, here are some of the modifiers: "improve slightly", "still high" but "well below" the national unemployment rate, "less bleak". But there's this one from the mouseover text from the line graph accompanying the article: 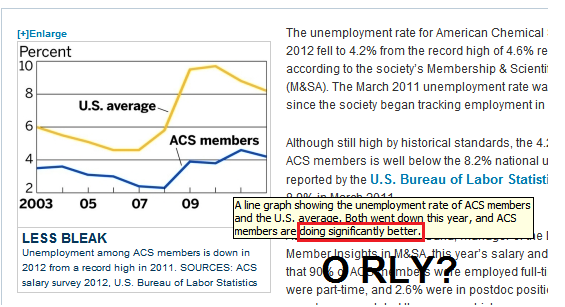 That's right, folks. We're only at the 2nd highest reported unemployment rate of the last twenty years (remember, 3.9% in 2010 was "the highest percentage of chemists out of work in at least the past 20 years"), so we must be doing "significantly better."

There's one more factor to consider: BLS estimates of chemist unemployment have been mostly higher than the ACS number (BLS: 6.1% for 2011, as opposed to ACS' 4.6% for March 2011).

BLS reports that doctoral degree recipients had an unemployment rate of 2.5% in 2011. That all ACS numbers and BLS numbers have been higher than that indicates the difficulties that chemists face.

U6-like at 10.4%: I've long called the ACS Salary Survey's aggregation of members that aren't full-time employees the "U6-like" number, in reference to the broadest U6 measure of unemployment that the Bureau of Labor Statistics uses. For March 2012, that number is 10.4%, which appears to be the 2nd highest of the last ten years (11.9% in March 2010). It's nice to see that number trending down.

A renewed focus: It's important to commend Ms. McGaha and her team for turning this data around so quickly in less than 4 (3?) months. Previous reports of the ACS Salary Survey data have taken much longer to surface (more than a year?). While we all have our issues with the ACS Salary Survey (see the Eka-Silicon caveat below), it's really great to see them become more responsive over time.

It's also nice to see Rudy Baum once again take the lead in writing the C&EN news stories on these issues. Call me naive, but having the C&EN editor-in-chief write these stories shows the growing importance of #chemjobs issues.

It's time for the Eka-Silicon caveat! The ACS Salary Survey and the ChemCensus have both had relatively low response rates from members, which limits the extrapolatability of the data. This year's response rate for the ACS Salary Survey is unknown. A discussion of this can be found in the comments here. At the same time, ACS unemployment numbers for their members more-or-less track the BLS survey data for chemists.
Posted by Chemjobber at 12:20 PM