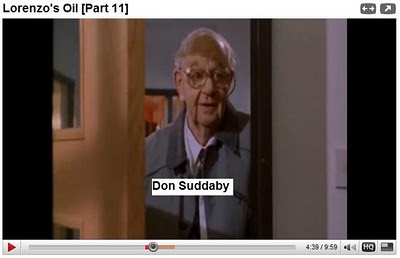 A couple of weeks ago, In the Pipeline had a thread about the most "realistic depiction of a research chemist in some sort of popular entertainment". Sili chipped in with Lorenzo's Oil, which has both Augusto Odone's rather impassioned explanation of fatty acid synthesis and best of all, the depiction of a chemist, in the twilight of his career, purifying erucic acid (the titular oil of the movie.)

Don Suddaby was the chemist that did that remarkable work and he was asked to play himself in the movie. Mr. Suddaby worked for Croda International in the UK. According to an article by Steve Herman in Global Cosmetic Industry*:

Suddaby was a chemist with extensive experience in fatty acid chemistry. Within four months, working around the clock, Suddaby (who plays himself in the movie) prepared a liter of oil. The oil stabilized Lorenzo's condition, and more oil was needed both for Lorenzo and for other boys suffering from ALD.


The synthesis process was deemed too difficult for production of the needed quantities, and Croda tried a simpler composition, which proved even better than the previous oil... The details of the extraction and purification of Lorenzo's Oil can be found in the patent issued to Suddaby and Coupland, which is remarkably readable for a legal document.

The movie portrayal of Suddaby (YouTube, part 10, 4:21) is rather lovely (I love the closeup of a seemingly working distillation later in the film) and a nice write-up of his character is in a recent article by Xconomy's Stewart Lyman contrasting the current movie portrayal of the pharmaceutical industry with that in Lorenzo's Oil.

Mr. Suddaby appears to have passed on in 1993; I'm pleased that (thanks to Hollywood), we have some acknowledgement of his contribution to human health and also a very nice portrayal of a chemist on film. Now, if only we could get some more...

Email ThisBlogThis!Share to TwitterShare to FacebookShare to Pinterest
Labels: real chemists of genius