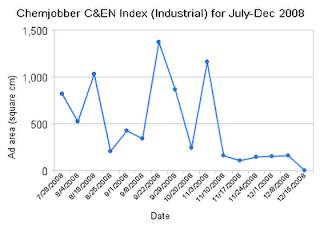 
*I've decided to use total area as the Chemjobber Index number from now on; if it proves not be useful, I'll change it. While it's not perfect, I think it's a good combination of the measure of intensity (willingness to spend money to try to find someone) and the number of positions available (while half-pagers can be used to try to hire one senior-level member, they're also used to hire many people with one ad.)
Posted by Chemjobber at 1:32 PM 2 comments:

[Formerly here, a photograph of JJLC's incredibly awesomely located lab facility.] While I don't think much of JJLC, I don't wish in any way for this to be seen as harassment. As I said, it's just a great place to put a lab. (I'm curious if his neighbors know, though.)

Enjoy, Mitch. Don't know if I'm going to have it up forever.
Posted by Chemjobber at 12:02 PM No comments:

While there are exactly ZERO positions for industry, it is either the last or one of the last issues for the year. The academic section has another fun regional school (University of North Carolina at Pembroke, student population 6303, SA-LUTE!) and one of our era's interesting innovations*, the US school with a Middle East branch, New York University Abu Dhabi. If you're looking for a faculty position in science, NYU Abu Dhabi may be for you. (I'm guessing that with the drop in oil prices, the endowment may be a little in trouble. Who knows?)

*Okay, so the American University in Lebanon may have been around for awhile.
Posted by Chemjobber at 5:46 PM No comments:

San Diego: A measurement of the quality of the local job market

The local ACS section publishes a monthly newsletter with job listings. I've taken the time to tabulate all the newsletters that I could find, starting in August of 2006. Below is a graph of the number of ads by month. 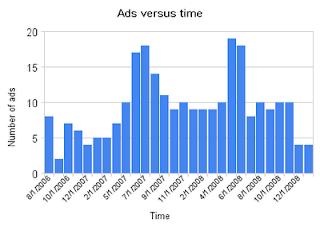 If you would have asked me what the job market was like in San Diego for chemists, I would have told you that it sucked. I regret to inform myself that, well, looking at this chart, it wasn't that bad and that I was applying (since 2/08) right through one of the summer peaks.
I suppose that it would be nice to have some data from 2004 or 2005, but it looks pretty steady. Older San Diego hands have told me that the market's been bad for awhile here -- I believe them.

Upshot: not as bad as I would have guessed. Still, not a perfect measurement of the chemistry job market. More work to do, I guess.
P.S. If anyone has a similar means of measuring for other job markets (or hotbeds, as Biospace would have it), let me know in the comments.
Posted by Chemjobber at 2:08 AM No comments:

As I find old copies of C&E News, I'll be subjecting them to the Chemjobber Index.* This one was from a couple of weeks ago. For the guy or gal looking to find a job in The Real World, it wasn't much better.

One of the best parts of a close reading of the academic section is that you run into schools you never knew existed. Kutztown University, student population of 10,193, SA-LUTE!

* At some point, the Chemjobber Index will have to transform itself into a single number. What should that number be and how should it be derived? Inquiring minds want to know.
Posted by Chemjobber at 1:17 AM No comments:

Boy -- this week sucks. Only one true industrial ad (Millenium, quarter panel) and a couple of ads from governmental areas. Whoo!

Slow week for all.
Posted by Chemjobber at 12:22 AM No comments:

Initially, this will be a simple counting of the number of jobs listed in the employment sections of the weekly issues of Chemical and Engineering News.
Posted by Chemjobber at 12:18 AM 1 comment: