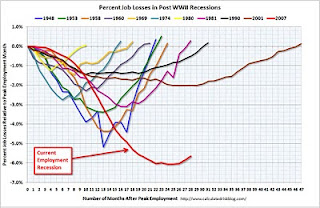 On Friday, the April unemployment numbers came out. The official unemployment rate (U3) inched up to 9.9%, up from last month's 9.7%. The broader measurement of unemployment (U6) is up to 17.1%, from 16.9%. It's believed that the increases in both of these are due to more folks looking for work, now that they believe the economy is improving. Let's hope that's the case.

In other measurements of the overall job market, hiring was up in March, even though the number of job openings and labor turnovers were flat. Layoffs were down. Small business hiring is also quite low and the number of people who have been unemployed for extended periods (27 weeks +) is high by historical standards. On a happier note, temporary hiring is quite strong, even though Kelly Scientific doesn't seem to be reflecting that on the ACS Career boards. One step at a time.
Posted by Chemjobber at 2:04 AM