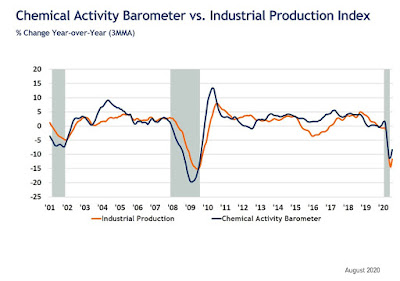 From the American Chemistry Council:


WASHINGTON (August 25, 2020) – The Chemical Activity Barometer (CAB), a leading economic indicator created by the American Chemistry Council (ACC), rose by 2.5 percent in August on a three-month moving average (3MMA) basis following a 3.0 percent gain in July. On a year-over-year (Y/Y) basis, the barometer was down 6.1 percent in August.

“With four consecutive months of gains, the latest CAB reading is consistent with recovery in the U.S. economy, which is likely to be slow,” said Kevin Swift, chief economist at ACC. “The August reading is only 5.8 percent below its pre-coronavirus level, and the indicator appears to be improving at a fairly good pace.”

Good to see things are slowing coming back; I imagine this augurs relatively well for chemical industry employment for the rest of the year.
Posted by Chemjobber at 5:30 AM