Safety officers of the world, cringe! 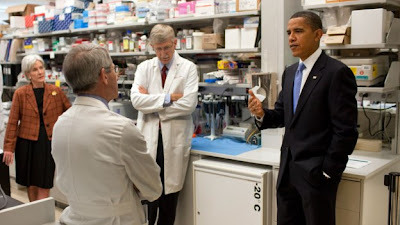 This is one of those things that bench scientists hate putting up with -- silly visiting dignitaries, using your labs as their props. Why the lab manager could apparently spare PPE for Drs. Fauci and Collins and not HHS Secretary Sebelius or the President of the United States is beyond me. (Photo credit: Lawrence Jackson /White House)

What kind of message would it send to the bench scientists of America if the President had donned a pair of safety glasses and a specially embroidered Presidential lab coat?* Now that would be change I can believe in.

*P.S. Thanks for the stimulus money! There are some seriously starving postdocs out there. Now about all of those out-of-work middle-aged bench scientists...
Posted by Chemjobber at 12:01 AM