Letters reacting to Jyllian Kemsley's article on the UCLA tragedy of research assistant Sheharbano "Sheri" Sangji have been posted on C&EN Online. (I really appreciate the fact that C&EN has posted more letters online than they were able to print. Way to go, guys.) More on the letters substantively, later.

Here is a Wordle word cloud representation of all the words used by the correspondents in C&EN: 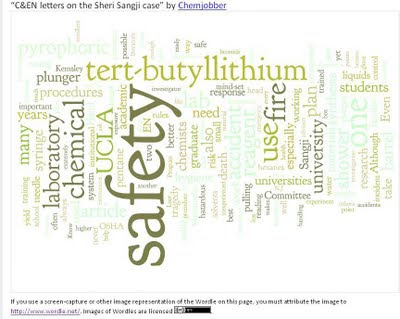 Here is a word cloud of all the words I've used to talk about the Sangji case: 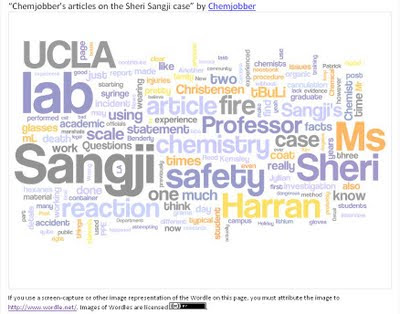 What's the difference? Not much, really, except for one word: Harran.

UPDATE: C&EN Editor-in-Chief Rudy Baum comments below: "C&EN ran ALL of the letters it received on Jyllian Kemsley's coverage of the accident at UCLA, either in print or online. Harran's name is not prominent in the word cloud because almost none of the letters mentioned him."

In the comments below, I stated my opinion that the lack of Harran's name in the letters was a choice on the part of the editors. My opinion was clearly not correct. Apologies to C&EN and the editorial staff.
Posted by Chemjobber at 7:57 AM