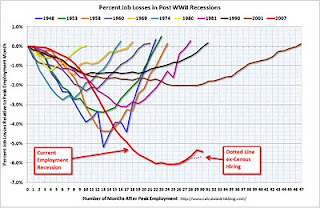 Good morning! These numbers are about 7 minutes old, so bear with me as I don't have the analysis down pat yet.

While these numbers are not bad, I am going to guess that they have more to do with dropping labor force participation rather than increasing payroll numbers. Speaking of which, private sector payrolls increased by 83,000 in June, which was lower than the 100,000 jobs expected by analysts.

More later, as much more expert people begin commenting on these numbers. Enjoy! (okay, not really). But have a good weekend! (truly)

UPDATE 1: Private non-farm payrolls increased by 125k.  Thanks to Calculated Risk for the graph.

UPDATE 2: Okay, let's try that again. Private non-farm payrolls decreased by 125k in June. To quote from the BLS press release: "The decline in payroll employment reflected a decrease (-225,000) in the number of temporary employees working on Census 2010."

All in all, things aren't really looking so good and there aren't a ton of bright spots out there. Sigh.
Posted by Chemjobber at 8:43 AM