Chart of the week: a decade's worth of layoffs in Big Pharma 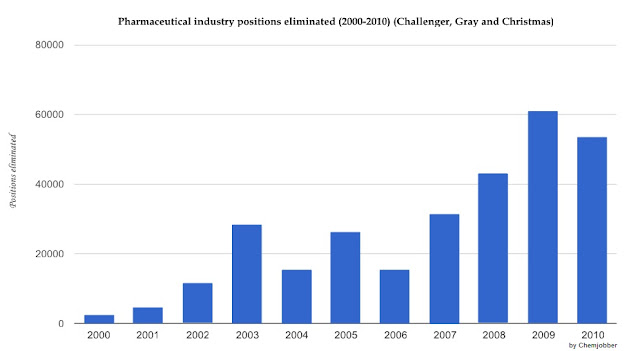 The chart speaks for itself; Derek notes that he was part of the numbers in 2006. I'll note that for each of the above years after and including 2006, I believe I can name someone I know who was laid off. (Big surprise, really.) A historical (and unfair and possibly inappropriate) comparison: the Battle of Antietam had 23,000 casualties. Operation Overlord is listed with 14,000 to 19,000 casualties (for both sides).

Unfortunately, the numbers don't do a breakdown between R&D and sales forces, etc. But I suspect that it was in 2007 that the site-wide closures (here's looking at you, Ann Arbor) that started really hammering chemistry employment. Of course, there is also churn where people are laid off and immediately rehired elsewhere; this series of comments by Rick puts together a nice summary of that activity.

Best wishes to all of us.
Posted by Chemjobber at 7:59 AM

Email ThisBlogThis!Share to TwitterShare to FacebookShare to Pinterest
Labels: awful statistics, chart of the week