Can a grad student ever win against a professor? 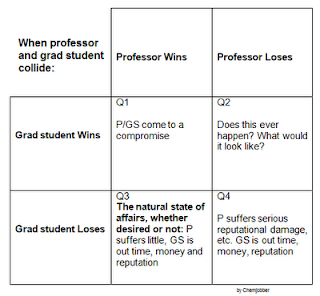 The fantastic discussion about the Michigan grad student and her advisor led me to a basic thought about graduate school, which is that it's a system that's naturally set up for poor outcomes for graduate students if a graduate student were ever to seriously collide publicly* with a professor. I've drawn the oversimplified chart to the right to illustrate my thought process.

Whenever a graduate student and a professor conflict and a compromise cannot be reached, there are 3 possible outcomes, represented by quadrants 2, 3 and 4. The Michigan case started at quadrant 2: by dismissing the student, there was not much reputational harm to Professor Goldman. The cost to Ms. Dibbern includes reputational damage and opportunity costs associated with being removed from a graduate school program.

By appealing to the university administration and going public, Ms. Dibbern has moved the outcomes to either quadrant 2 or quadrant 4. The provost's statement of support for Professor Goldman indicates that quadrant 2 is unlikely; it remains to be seen whether Professor Goldman suffers reputational or career damage associated with the case.

[I should note that I can't imagine what "professor loses/grad student wins" even begins to look like. Has there ever been a case where a public disagreement between professor and grad student results in a clear win for the graduate student?]

What does this chart tell me? Like @UnstableIsotope says, it might point to a need for a formalized process to deal with graduate student dismissal. It also says to me that it's best to attempt to compromise with your professor -- you're unlikely to win a public battle. If a public battle results, lose/lose just might be your best outcome.

Readers, where am I wrong?

*Publicly = the conflict is known outside the professor's laboratory.
Posted by Chemjobber at 11:31 AM