"The Difference A Lab Coat Can Make" 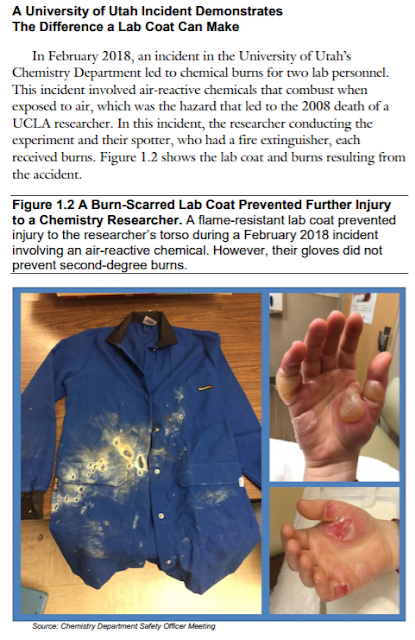 Via a report in the Salt Lake Tribune (by Courtney Tanner) and help from Twitter, this rather alarming report from the Utah State Legislature about an incident at the University of Utah:

In February 2018, an incident in the University of Utah’s Chemistry Department led to chemical burns for two lab personnel. This incident involved air-reactive chemicals that combust when exposed to air, which was the hazard that led to the 2008 death of a UCLA researcher. In this incident, the researcher conducting the experiment and their spotter, who had a fire extinguisher, each received burns. Figure 1.2 shows the lab coat and burns resulting from the accident.

In this case, the researcher was wearing a flame-resistant lab coat or more serious injury could have occurred. Unfortunately, we observed and OEHS has reported repeatedly that lab coats in general are not being worn consistently.

Unlike the incident at UCLA, two major differences were observed in the University of Utah’s incident report. First, the researcher was wearing the flame-resistant blue lab coat shown in Figure 1.2. As the figure shows, the air-reactive chemical left burn marks in the material. However, an incident report noted that the clothing and skin beneath the coat were unaffected. The second major difference was that a spotter was present to extinguish the chemical. Neither of these safety precautions were present in the UCLA tragedy.

After the Chemistry Department’s Safety Committee reviewed the incident, the following improvements to this specific lab group’s safety practices were identified.

This is a good and regrettable reminder that it's hard to learn from our history, even incidents that were famous just ten years ago. I find it a little bit depressing that this incident happened, and that so much of it was predictable from the Sheri Sangji incident, i.e. the lesson from the incident that a syringe must be properly sized for the amount that it needs to withdraw was not followed in this case.

However, there is cause for hope. If this had happened 10 years ago or 20 years ago, the student would not have been wearing a flame-resistant lab coat, and the researcher would have sustained far more life-threatening injuries. In addition, I suspect that the presence of a spotter with a fire extinguisher at the ready was also a procedure added post-Sangji. Little by little, I sincerely hope that academic chemistry's safety record is improving.

(Questions that I don't have time right now: What the ##$$ is it going to take for us to get reports of serious incidents or near misses out of industry or academia on a regular basis? There should be some kind of central repository of these incidents that can be anonymized so that the community can learn.)

UPDATE 0515191700: Jyllian Kemsley reminds us about the Pistoia Alliance Chemical Safety Library.
Posted by Chemjobber at 6:00 AM