Chemistry in the desert: life at China Lake 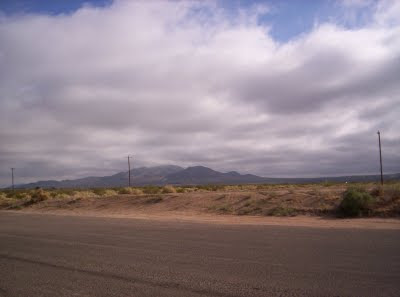 I posted a bit on one of the recent DPTs about working at China Lake, which is one of the US Navy's weapons-related scientific research labs. A poster wrote in and said that they worked there; we'll call this person B.L. Below are a few questions with B.L. about life doing a postdoc for the US Navy; B.L.'s answers were lightly edited for clarity and checked for accuracy.

CJ: What was your background? What did you do, scientifically, out there at China Lake?

My background was actually organometallics for my Ph.D. followed by a first postdoc in organic methodology. China Lake was my second postdoc. What I did there was actually to work on "n-doping" conducting organic polymers which would be used as the anode in a polymer-based supercapacitor (lightweight battery replacement!). The chemistry involved lots and lots of pyrazine cheimstry - which I had never done before - so I didn't have a whole lot of success. The real pity is that the project was my own idea...I of course worked on synthesizing other heterocyclic systems when the pyrazines didn't work out.

What is it like to work at a government lab? How is it different than an academic one (or an industrial one?)
Hmm. Now that I've been in all three types, I can say the major areas of difference are in safety and in instrumentation. As we're all painfully aware, safety in academia is pretty much up to you - nobody tells you to do much of anything. In industry, believe me, if I so much as appear without a lab coat on I hear about it. To say nothing of the public mea culpas and detailed analysis of anything defined as an "incident" that I have to go through if, god forbid, I have an actual incident in the lab. And an "incident" may be as simple as blowing my reaction through my condenser (whoops) or cutting myself on glass.

At China Lake, at least, it's a little bit in between for safety. No one made me wear a lab coat, but they didn't want you to even think about working alone. No after hours reactions unless you could find someone else on the wing and tell them what you were doing. If you blew your reaction through your condenser, nobody really noticed, but on the other hand, if you had even a minor detonation, it was a very serious thing, involving a very similiar process to the public mea culpas, detailed analysis, etc., etc. that I deal with in industry.

One thing at China Lake that was very cool was the emergency system. If you felt threatened for any reason you could run to the hallway and hit an emergency button that simultaneously put all the hoods on overdrive, sounded an alarm, and set emergency lights flashing. From a chemical point of view this might only be useful to keep contamination from spreading from the one affected hood, but really it was there to let everyone know that someone was in trouble. This was used several times during my one year there, and let me tell you, it was effective. So yeah, at the one government lab I've been at safety was maybe not quite as rigorous as at the industrial lab I'm in now, but I think you'll be safe nonetheless.

From the instrumentation point of view, in academia anything you will reasonably need or want is there, but you have to learn to use it yourself at great expense in time. In industry, at least where I am now, we have everything I could want and there's a dedicated staff of skilled technicians who carry out all analyses for me (this is ideal). At China Lake, they have everything you could reasonably want but you'll have to learn most of it yourself again - although for some instruments there are staff members who will do it for you. Also, for certain projects they have extraordinarily awesome and expensive instruments - probably not for your project though (tough).

Who was your supervisor (i.e. a naval officer or a civilian scientist?)

My supervisor was a civilian scientist, and that's pretty much how it goes at China Lake! Your boss may have a deep security clearance, but he or she will not have a rank, serial number, and a buzz cut. The R&D employees there are pretty much 100% civilian.

Did you feel that it was a true "post-doc", in that there was a scientific project that you were responsible for driving forward?
Absolutely. In order to get the postdoc positions advertised, you'll have to be awarded a fellowship and you'll have to go through the usual fellowship application process (as you'll find out when you send in an application. They are typically funded through a DC based outfit call the American Society for Engineering Education). When I was writing my fellowship application, my future boss gave me the project background and a few suggestions and then I had to hash out the rest myself. I had an original idea, a well-thought out method of getting to my target compounds (I thought), and that was the project I was responsible for pushing forward. Well, changing fields almost 100% may look OK on paper, and it didn't really work out in the lab, but my original proposal was what I was sinking or swimming with.

What was it like to interact with the military folks?
The only interaction I had with military personnel was showing my badge at the entrance gates! I never saw anyone in uniform wander down our wing (unless it was by accident). For the most part, military higher ups didn't get involved until field testing stages, which I never had anything to do with.

If it was synthetic chemistry, what is it like to do synthetic organic chemistry on explosives?
Ah, no explosives here. However, I shared a lab with Robert Chapman (who will be some lucky applicant's supervisor on the explosives research project). Bob did things in the lab on a very, very small scale. In fact, he typically used unstabilized methylene chloride as solvent - because the stabilizer would mess up his NMRs after he was done with his syntheses! So, minimal danger level there. When he was scaling up he would use a totally different building - I saw him once walking around with the really thick overhead stirrer shafts, so I can only imagine about the safeguards involved in that facility.

Where are you now? How did your naval postdoc help or hinder you?
I am out in the big wide world of industry now, and I have been for the last four years. I'm obviously not in pharma given my pedigree. I have to say that I think the naval postdoc helped, if only a little bit. Remember, you need to win a fellowship to go there, and that only looks good on the resume. Now, if you were interested in working on esoteric military-based materials problems, you should definitely go. Go now. (Emphasis CJ's.) When I met the division director at China Lake, the first thing he told me is that it was possible to become staff from being a postdoc there. One of my postdoc friends from China Lake is currently (unbelievably well remunerated) staff at Edwards AFB. People have jumped between China Lake and Los Alamos. So if you are interested in military stuff it is a foot in the door.

A few more things: The research projects at China Lake are entirely devoted to the needs of the Navy. This means that really big important projects there will be all about stuff that you probably never thought of....This also means that everything you work on may end up on either a warship, a fighter plane, or a missile (China Lake is home of the Sidewinder missile, and also all of the US Navy's missile testing program, as you will quickly find out if you end up going there). For an example, one of the things reaching the field testing stage when I was about to leave was an organic polymer intended to replace chromium-based anticorrosion primer paints. This project was a big, big deal. Also just as I was leaving a call went out for proposals for a lead-free solder. These were both environmental-based issues, but even my early stage project for lightweight battery replacements was intended to lighten...missiles. Missiles need batteries too, and the engineers decided that lighter batteries would increase performance by a non-trivial amount.

Another thing to remember is that they actually want to publish as much as possible at China Lake. The defense granting agencies treat applicants a lot like the more academic institutions in using publications as a sort of judgement mechanism. So if at all possible, your research will not disappear down a black hole. There was also a really cool division of patent royalties, in the unlikely event that you work on a real hit, you may one day see some real money.

About living in Ridgecrest: Well, the location is not good. It's in the middle of the Mojave desert. The view from my living room was nothing but red rocks, dirt, and creosote bushes right up to the horizon. I didn't like it, one little bit. However, management there knows it sucks, and they try hard to make it better. We all had "flex-time" whereby everyone worked an extra hour for nine work days, and then every other Friday was off. But, no one really cared if you worked that extra hour every day...so, 26 extra days off per year. The $50,000 stipend will cover nearly anything you could want out there. My 2-bedroom apartment went for the princely sum of $450 per month. Really, just don't buy a new Corvette and money will be no problem.

And yeah, you're at least three hours of frantic freeway driving from anywhere...but even so, at times the basic weirdness of it all is really entertaining. I remember cradling a length of threaded pipe capped at both ends bearing a label of "Sarin" in one of the stockrooms (CJ: !!!)....I'll never do that again....so, yes, if you want something different you might consider it.
Posted by Chemjobber at 7:41 AM

Email ThisBlogThis!Share to TwitterShare to FacebookShare to Pinterest
Labels: interviews