The details are out: C&EN publishes its findings on the Sheri Sangji/UCLA case 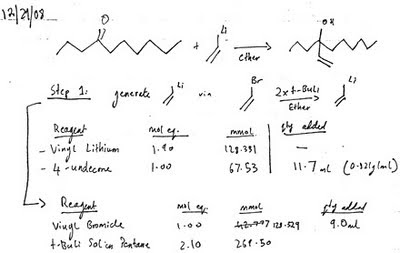 (Photo of Sheri Sangji's Dec. 29, 2008 reaction from UCLA, credit to C&E News.)
Jyllian Kemsley of Chemical and Engineering News has published a remarkably detailed account of the incident that claimed the life of Sheharbano "Sheri" Sangji, who was working in the laboratory of Professor Patrick Harran, who is the Donald J. Cram chair of organic chemistry at UCLA. She has collected a great deal of governmental electronic documents from the investigation -- I cannot praise this decision of Ms. Kemsley and C&E News enough, as it is provides the "raw data" that chemists can use to make safer decisions from now on. This is the power of the Internet and open inquiry, folks.
For those of you who have been following my commentary on the case, I strongly recommend that you go and read the whole article. Almost as valuable as Ms. Kemsley's article is the transcript of the interview between Prof. Harran and two UCLA fire marshals.
Questions that are answered: In my first post about the case, I asked a series of questions about the incident. I believe these can now be answered:
How much, if at all, did 1) the holiday, 2) lack of safety training or 3) language or communications issues on the part of her coworkers contribute to her injuries?
It does not appear that the holiday contributed to a delay in emergency response. It does appear that the EMS response was delayed because they stopped before entering the building, because they considered the accident to be a HazMat-type scenario. (page 23 of the interview (numbers on the pages, not the PDF.) It does appear that there was a lack of formal safety training (Ms. Sangji had not taken the quarterly EH&S class). Language or communications issues with the two Chinese postdocs did not contribute to her injuries, but it is clear that communications issues did interfere with the investigation, as their interviews were performed through a Mandarin translator. (last page)
Did her work fall under "critical research needs", as laid out by UCLA department policy?
No. It is clear from the interview that Harran was unaware of this UCLA policy. (page 2 of interview)
UPDATE: See here for Jyllian Kemsley's comments on this point; she notes that the UCLA administration was aware that research labs are open and working during the winter break.
Are we to include death as a potential consequence of mishandling t-butyllithium?
Yes. It's clear (to me, anyway) that a combination of remarkably large scales of tBuLi, relative inexperience with needle/syringe transfers and a lack of proper PPE can result in serious burns, which can result in death. Chemist, beware.
What was the scale of the fatal reaction? What kind of setup was she using?
As can be seen from the picture above (and the scanned copies of Ms. Sangji's notebook), the fatal reaction was intended to be performed on 150 mL scale of (1.69M tBuLi in pentane.) Prof. Harran considered it be a "moderate" scaleup. Ms. Sangji appears to have been using a nitrogen bubbler setup, which is pretty typical in organic chemistry labs.
New details: According to the article, Ms. Sangji was using a 1.5 inch needle on a 60 mL syringe. CJ's speculation: If she was using a 100 mL bottle of tBuLi, she probably actually tipped the bottle upside down. It does not sound like she had clamped the bottle, which is considered proper procedure (and would subsequently require use of a longer needle.)
(Note to chemists: Look, we've all been there before. All the long needles have been crapped up by your stupid coworkers and so, you reach for the little one. This case is exactly why you should keep your needles clean (away from your stupid slob coworkers?) and use the right ones for the right procedure.)
More UCLA flacks become chemistry background experts: We've already seen UCLA Vice Chancellor for Legal Affairs Kevin Reed insist that Sheri Sangji was an "experienced and skilled chemist." Ms. Kemsley noted (possibly with a trace of irony?) that "UCLA has no evidence that Sangji used tBuLi more than once before the day of the incident..." Head PR flack Senior Executive Director of the UCLA office of media relations Carol Stogsdill intimates that "[Ms. Sangji's] resumé and work history show that she was familiar with pyrophorics - and importantly, the techniques we use to handle t-butyllithium are common to those employed when handling a wide-range of air-and/or moisture-sensitive chemicals."
Uh, what? You've got to be kidding me -- you can tell from a person's resumé and work history that they've used or are familiar with pyrophorics? Really?
More to come: This article (and the accompanying documents) are really, really remarkable in their depth and breadth. I'll be looking at these further as the week goes on.
UPDATE: Jyllian Kemsley comments on the winter break aspect of the case here.
Posted by Chemjobber at 10:30 PM