What is Parabon's technology? I don't understand it.

Via Extreme Tech, a NSF press release for a drug delivery company that I just don't understand:


..."We can now 'print,' molecule by molecule, exactly the compound that we want," says Steven Armentrout, the principal investigator on the NSF grants and co-developer of Parabon's technology. "What differentiates our nanotechnology from others is our ability to rapidly, and precisely, specify the placement of every atom in a compound that we design."

..."When designing a therapeutic compound, we combine knowledge of the cell receptors we are targeting or biological pathways we are trying to affect with an understanding of the linking chemistry that defines what is possible to assemble," says Hong Zhong, senior research scientist at Parabon and a collaborator on the grants. "It's a deliberate and methodical engineering process, which is quite different from most other drug development approaches in use today."

...The Parabon and Janssen researchers intend for their new prostate cancer drug to overcome several existing cancer-treatment obstacles. The drug design combines a toxin with a chemical that makes cancer cells susceptible to that toxin. Additionally, the drug incorporates components that improve delivery to cancer cells while avoiding healthy tissue, and chemical markers that allow researchers to monitor the drug's arrival at tumors. For the new compound, total design time plus synthesis time will be a matter of weeks.

..."Currently, most drugs are developed using a screening technique where you try a lot of candidate compounds against targets to 'see what sticks'," says Armentrout. "Instead, we're designing very specific drugs based on their molecular structure, with target molecules that bind to receptors on specific types of cancer cells. In plug-and-play fashion, we can swap in or swap out any of the functional components, as needed, for a range of treatment approaches."

Huh? I really don't quite understand what is going on here. What's worse is the Extreme Tech explanation for what is happening -- it makes even less sense. I'm going to highlight in bold the strangest sentences to this dumb chemist:


...While there are many applications in microelectronics, optics, and sensor technology where the ability to precisely engineer nanostructures would be invaluable, the ability to nanotailor drugs for treating cancer is ripe and low-hanging fruit...

Cancer medicines are typically so expensive that a real price per molecule can be discussed using familiar numbers. For this reason insurance companies do not want to be caught paying for any extra molecules if the prescription only requires a certain amount. They also want to be sure that the drug company is providing the amount claimed. Platinum for example, is more expensive than gold even before it is turned into a medicine. To use it as a cancer treatment, any sample must be pure and the quantity known, and regulated as such. Beyond that it must be turned into a molecule that the body can properly absorb, distribute to the right tissue, metabolize, and excrete in a way that ensures sufficient time to function. Each of these steps can add an order of magnitude to cost — and that’s just for simple metal ion.

...The DNA itself is not the drug. The DNA is the ferry that brings to bear the drug or other molecule of interest that is bound to it. The DNA also acts as the selector that tags the correct drug, the counter that determines its total number, and the matrix that stabilizes it in a permanent structure. Many cancers are currently treated with a medicinal cocktail, which for some reason is invariably prescribed as a combination of four drugs and designated with a four-letter word. The right blend for one patient is not the necessarily the proper one for the next, and neither is the dose. Excess drug and mismatch of inventory to demand is a problem no cancer treatment center wants to have, particularly when shelf life is limited. Hospital and pharmacy error is also a significant problem. On-demand DNA-based assembly suddenly makes many of these problems recede into the distance...

...The ability to program-in new functional molecules is nearly as limitless as one might have bar codes to track the vials in which store them. For drugs, your custom pill could also have all the other things that might be needed rolled into one. Drugs to treat the side-effects of the primary treatment, anti-nausea medicine, blood thinners, pain controllers, and whatever else.

For now, the methods that Parabon uses to create its starter molecules — the relatively short DNA strands to which a drug or other molecule is actually bound to — are synthesized by the trillions in identical form with standard methods, probably traditional PCR. This is not, in a strict sense, identified with the 3D printing methods of today. As the technology evolves, the “building of the house” may become more closely knit within the same platform to the “building of the city,” and PCR machines may evolve to become more like 3D printers. The extent to which this is already happening is tough to know, but we can be sure of one thing, it is definitely happening.

This is a big prank or something? Has this text been machine translated from the original Urdu? 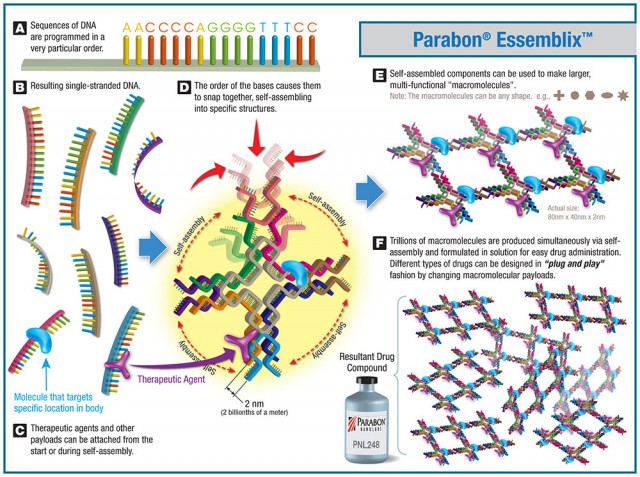 If you look at the actual graphic that's involved, I think the idea is the following:

Anyone have a better idea of what it is?

Naturally, this is the problem when science gets translated by people who don't fully understand what's going on. Metaphors get mixed, language "sounds about right", and people press "publish"/"send" instead of sitting down and actually reading the text. (Besides, DNA-drug hybrid technology has been known for quite a while, right?)

Readers, do you have any idea what this technology is?
Posted by Chemjobber at 11:01 AM

Email ThisBlogThis!Share to TwitterShare to FacebookShare to Pinterest
Labels: cj sez no