Process Wednesday: the number of Suzukis done on process scale is less than I thought 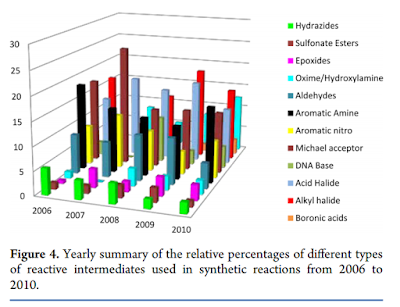 From Organic Process Research and Development, a review by Elder and Teasdale [1]  on the difficultly in avoiding potentially genotoxic/reactive intermediates in later-stage syntheses. The authors reviewed the last decade of OPRD papers and found the following:

...The review covered 302 publications from this journal covering a 10-year period (2001−2010). The review data are provided in Tables S-1 to S-10 in the Supporting Information. (CJ's note: PDF) There was only one synthetic route (i.e., for netilmicin, published in 2002) that avoided the need to employ reactive intermediates during the entire synthesis....

...In the second half of the decade (2006−2010; Figure 4), whilst these two classes of reactive intermediate (acid halide and alkyl halide) remained prevalent, they were joined by aromatic amines and Michael acceptors as the predominant classes. Aromatic amines (along with the related aromatic nitro precursors) have attained popularity because of the desire to introduce late-stage coupling reactions (e.g., Suzuki, Heck, etc.) into chemical schemes as part of green chemistry initiatives. Similarly, activated alkenes (or Michael acceptors) can readily undergo addition reactions with nucleophiles, one of the most attractive methods for the formation of C−C bonds, using mild reaction conditions. These findings are somewhat at odds with an earlier survey of good manufacturing practise (GMP) bulk reactions run in a research facility between 1985 and 2002, which showed that Michael addition reactions remained constant at about 7% of the total over that time period. However, this may be a vagary of the chemistries studied....

I am somewhat surprised at the relatively small number of boronic acids - I wonder if that number will either rise or fall for the 2010-2015 period? I wonder what future reactive intermediates will be seen?