Why choose a Ph.D. in chemistry? A response to @DocFreeride

A while back, Janet Stemwedel wrote a long, detailed response to my comment on Jon Bardin's commentary (got that?) on the angst of senior science graduate students looking for jobs.

I'll paraphrase some of her main points here:

As you can tell from the time that has passed, I've wrestled with Dr. Stemwedel's essay quite a bit over these last weeks. I hesitate to say that the essay has persuaded me, but it has got me thinking about these issues more. Some direct responses to my reading of her points:

The knowledge problem: I agree that chemistry undergraduates and graduate students don't know and possibly don't care about their job prospects. For those that do, there's the ACS Salary Survey/ChemCensus, the ACS Starting Salary Survey, their advisers, their fellow students and postdocs, the rumor mill (and this blog.) I don't think (and apparently, neither does she) that they're purposely misinformed. I think it's more likely that professors just don't have the incentives set up to keep track of all of this information: career prospects, hot fields or the overall state of the #chemjobs market. (What's worse is that I'm not sure anyone knows the current state of the chemistry jobs market. I try my hardest to measure where I can, but I do this as a hobby, not a day job. The American Chemical Society has decided to put its effort into 3 or 4 measurements, spread out through the year. The US Bureau of Labor Statistics does its thing once a year. That's pretty much the extent of what's out there.)

The casino problem: The metaphor that she uses for a portion of the essay is a casino:


How exactly are chemistry graduate students presumed to be different here [than philosophy graduate students]? Maybe they are placing their bets at a table with higher payoffs, and where the game is more likely to pay off in the first place. But this is still not a situation in which one should expect that everyone is always going to win. Sometimes the house will win instead.

(Who’s the house in this metaphor? Is it the PIs who depend on cheap grad-student labor? Universities with hordes of pre-meds who need chemistry TAs and lab instructors? The public that gets a screaming deal on knowledge production when you break it down in terms of price per publishable unit? A public that includes somewhat more members with a clearer idea of how scientific knowledge is built? Specifying the identity of the house is left as an exercise for the reader.)

I think the casino metaphor is useful, but incomplete. It is my understanding that philosophy graduate students pay for their own tuition, teach classes/get a fellowship to get a stipend and generally need to more or less fend for themselves (with student loans making up the difference.)* In the case of chemistry graduate students, tuition is very rarely paid by graduate students (as opposed to their departments/advisers) and teaching classes is seen as a temporary problem until their professors support them. (In fact, many departments severely frown on students taking outside odd jobs to gain more money.) While finding prestigious postdocs (and NIH/NSF postdoctoral fellowships) are difficult, it is always possible to find a postdoc somewhere. Federal or state funding, of course, pays for all of this.

Not only are philosophy students playing a different game in the casino, they're also being charged admission to the house. They probably see the bills upfront and regularly. On the other hand, it's probably only a mild exaggeration to say that workers in academic chemistry are not charged admission and are plied with free drinks and food while they sit (and toil!) at the tables . In short, the costs (opportunity and otherwise) may be more obscure for chemistry graduate students than those in philosophy.

*UPDATE: Dr. Stemwedel points out that philosophy students are funded fairly similarly to chemistry graduate students: "Ph.D. students in philosophy don't pay their own tuition, either. It's pretty much just the same deal as Ph.D. programs in chemistry, except the TAing probably involves less contact with pre-meds, and the number of years of guaranteed support is usually lower (4-5 years), which means that if you go beyond that (which many do), you need to find a job, or a stop-gap grant, or take out loans."

What's it all about? Her concluding paragraph: 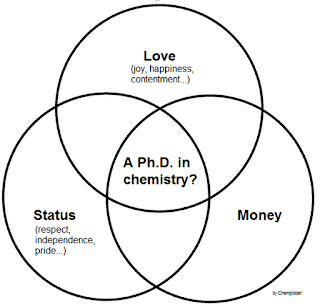 "[T]he whole discussion suggests to me that the very best reason to pursue a Ph.D. in chemistry is because you want to learn what it is like to build new knowledge in chemistry, in an academic setting. Since being plugged into a particular kind of career (or even job) on the other end is a crap-shoot, if you don’t want to learn about this knowledge-building process — and want it enough to put up with long hours, crummy pay, unrewarding piles of grading, and the like — then possibly a Ph.D. program is not the best way to spend 5+ years of your life."

I don't know how to choose a career (or a career path), but when I think about the different motivations that might enter the decision, I think of the diagram above. I don't know where I came up with this Venn diagram, but it's been in my head (Kekule-like) since I've been reading responses to my Bardin post. Maybe you would come up with a different Venn diagram with different factors, but those are the ones that come to mind. It's fairly self-explanatory, with factors like love (the sheer joy of chemistry), status (e.g. that we are thought well of by our friends and family for having an advanced degree, that I am proud to be a manufacturing chemist) and money (i.e. for the most part, our jobs pay an above-median wage) lend themselves to thinking that a Ph.D. in chemistry might be a good deal. I feel each one of these factors deeply.

This blog (and all of the #chemjobs talk that I do) is basically worrying about the fact that love and status will not make up for the changing economy and how it affects money. To me, Dr. Stemwedel's post says "Forget about money -- will love and status will be enough for you?"