The big news first: Challenger, Gray and Christmas (which is a company that does outplacement services for large firms, and tracks layoffs as a result) reported that there have been 19,507 jobs lost in the US pharmaceutical sector for 2013, with pharma announcing 10,585 cuts in October. That's a big number, and as you can see below, that easily beats 2012 (14,150.) 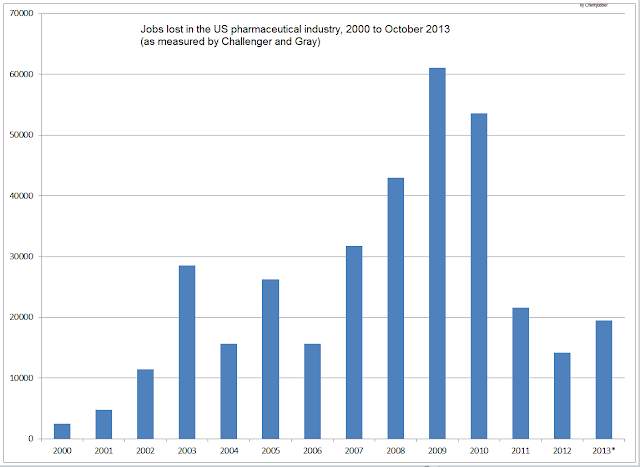 The inspiration for this chart, of course, is Matt Herper's vital and still-relevant analysis that he put together in April of 2011. John Carroll (FierceBiotech) followed it up in October 2012, and I'm just adding the relevant numbers so that the chart is up to date. (See here for the spreadsheet that the above chart is based on, I'm putting the links to the relevant Challenger press releases below.)

Since 2000 until the end of October 2013, according to Challenger's numbers, there have been 349,502 jobs lost in the US pharmaceutical industry. As Matt smartly pointed out in 2011:


"not all those people remained unemployed, and the total headcount of the pharmaceutical industry did not drop that much. Many of those who were laid off were probably hired back by other drug makers. Some folks have probably been laid off more than once. It’s also worth noting that big mergers are one reason for the cuts."

This is a vital industry, and one that I'm proud to be a part of. While I think there are definitely glimmers of hope here and there, times are still very hard. Best wishes to all of us.