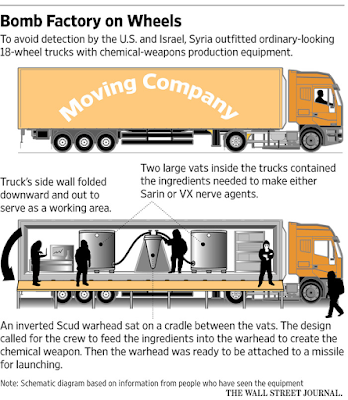 I've been meaning to post on this July Wall Street Journal article* on what chemical weapons inspectors found in Syria:


Parked outside the bunker were mobile weapons-production facilities that sat on 18-wheelers. Inspectors would later liken the vehicles to Transformers toys because they looked so ordinary on the outside. As such, they would have been difficult to target from the air.

“This wasn’t kitchen chemistry,” Mr. Smith recalls thinking. “It was a piece of quality engineering.”

Syrian guards carried the empty aerial bombs out of the bunker and laid them in a row. The Syrians had stored them without chemicals inside. Mr. Cairns says the bombs contained two internal chambers separated by a thin membrane. When the bombs are filled with chemicals, activating them requires turning a crank attached to the back of the bomb, which rotates a rod inside, pierces the membrane and mixes the chemicals.

As someone who has done some 50-gallon chemistry back in the day, it doesn't surprise me that you could set up a mobile laboratory in a typical trailer. (Heck, they managed to stick a suite of reactors on a ship to neutralize those chemical weapons!) That said, it's probably not particularly comfortable for the operators nor would it be a particularly efficient means of production, I would think.

*Can't get to the article? Search for this headline: "Mission to Purge Syria of Chemical Weapons Comes Up Short"

UPDATE: A couple of nice articles about Scott Cairns, the Canadian chemist working for OPCW.
Posted by Chemjobber at 3:04 PM