Also from this week's C&EN, a jaw-dropping editorial by Ms. Madeleine Jacobs, the executive director and CEO of the American Chemical Society. You should go over there and read the whole thing, and then come back here. Ready? Go over there, and then come on back when you're done.

"only?": I don't think there's very much hay to be made about Ms. Jacobs' use of the word "only" in the sentence "Although unemployment for ACS members is only 4.2% compared with the national average of 8.2%, that rate is among the highest in 40 years (see page 6)." At the same time, when both Rudy Baum and Madeleine Jacobs are continuing to use the National Unemployment Rate as a comparison tool, I think it's important to emphasize a couple of things: 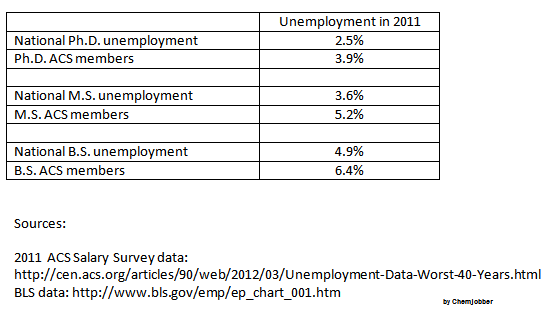 I understand that it is difficult to compare apples to oranges apples at all times, but when you start sneaking in words like "only" and "well below", it invites a closer look.

I don't think you want to go there: I was surprised to see Ms. Jacobs comment on the decision of one scientist and mother to dissuade her daughter from going into science. Here's the original comment:

She plans to “get out of Jersey and get out of science” when her daughter graduates from high school in two years. “She’s very good at everything, very smart,” Haas said of her daughter. “She loves chemistry, loves math. I tell her, ‘Don’t go into science.’ I’ve made that very clear to her.”

Also, here's what that mother* said further on Chemjobber:

Um, that was me who gave that quote. I don't mean to discourage my daughter from learning science. But I don't think it would be a good idea for her to practice it as a career.

This misguided advice so stunned me that I began crafting a response, but Daniel Jordan, a biology major, beat me to the punch with a superb letter to the Washington Post. He wrote: “Anyone who would discourage a child who loves math and chemistry from pursuing a career in science because it might be difficult to find employment might not be a scientist for the right reasons. Energetic men and women must be encouraged to enter the sciences despite these obstacles. In fact, those individuals who are passionate enough about their work to stick with it during times of hardship and who hunger to expand their, and our, knowledge of the world are the very ones we most want. … This prognosis of doom and gloom should be seen as a catalyst to redouble our efforts to foster creativity, ingenuity and admiration for the sciences.”

Right on, Daniel! The U.S. must support and produce the most-talented, best-trained scientists in the world to drive U.S. innovation. In the 1960s, in the aftermath of Sputnik, being a scientist was a noble calling. Many people became scientists to fulfill what they saw as their patriotic duty.

Well, Ms. Jacobs, why aren't you fulfilling your patriotic duty?!? I'm a scientist -- why can't you give up your position at ACS to go back to the bench and increase our knowledge of science? I am increasingly irritated by the Let-Them-Eat-Persistence crowd, a group of people who seem to encourage young people to go into science, but mostly have left bench science themselves.

[Also, isn't it poor form to take to the pages of a national magazine to chastise a mother's advice to her daughter?]

Madeleine Jacobs' poor power: Here is what I do not understand about Ms. Jacobs' editorial: she reports on the awful statistics on chemist unemployment and on the woes of manufacturing in the United States. She also acts as if she had no power to help the situation. There's nothing in her essay about using the power of her office to help her members or even bring light to the situation.

I don't expect much from the Executive Director -- she can't help me find a job, or improve my skill set. But to act as more-or-less a sympathetic bystander in this car wreck of a jobs crisis is very disappointing.

*Or someone claiming to be, anyway.
Posted by Chemjobber at 11:40 AM