A reader writes in to ask:


Off the top of your head, what do you think the average salary for a [less than 5 years] Ph.D. chemist at a small company in [the Midwest] is?  I mean small: [less than 20 employees.]  It's difficult to muddle through all of the ACS data, and their numbers always seem a little high anyway...

Let's go to the latest published full set of data, which is the 2011 ACS Salary Survey, based on reported numbers for March 2010: 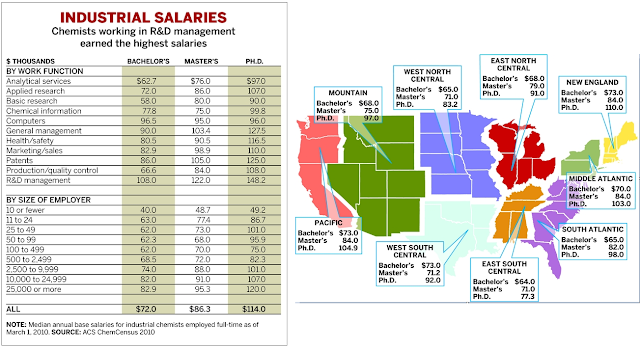 So the median Ph.D. industrial chemist makes 114k. The small company discount is HUGE; the median small company chemist (less than 25 employees) either makes 49k or 86k. As you can see on the right, all the Midwestern areas have median salaries for Ph.D. chemists that are significantly different from the median Ph.D. salary. Also, (not pictured) there's quite a drop between the 50th percentile for a young industrial Ph.D. chemist (87k) and "the median chemist."

Sorry -- probably news that you don't want to hear, reader.

I'm probably seriously comparing kumquats and bananas here, so take it with a grain of salt. Readers, what do you think?
Posted by Chemjobber at 12:54 PM