CEPA makes its report to the Philadelphia ACS conference

The official write-up of the presentations made to the Fall 2012 Philadelphia ACS Council is up, including the Committee on Economic and Professional Affairs' (chaired by Dr. Lisa Balbes) report: 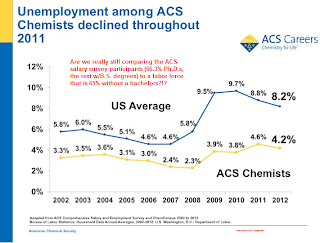 The percentage of ACS chemists who experienced some period of unemployment during 2011 was 8.2%, down slightly from the year before, with a median length of unemployment of four months. Industry members had the greatest probability of a period of unemployment.
Some 12% of ACS member chemists said that in the prior three years they had accepted a position or compensation package that was less than their previous position in order to maintain employment.

The rise and fall of salaries for chemists measures the demand for our services and expertise. In 2012, salaries in real dollars declined for Ph.D. and M.S. chemists, while B.S. chemists kept pace with inflation. In addition, many members reported that they were “underemployed” and that some employers were hiring higher degree holders at “rock-bottom” prices.

Overall, the majority predicted their situation would be about the same in March of 2013, with only 25% expecting their employment situation to improve. Interestingly, postdocs and those currently unemployed were significantly more optimistic than those employed full-time or part-time.

There's some new information in there, so I'll be circling back to this. For now, do be sure to check out the slides that are attached with the report, including the still-irritating comparison of ACS members with construction workers and nursing home attendants*.

*Honorable occupations, both of them.
Posted by Chemjobber at 11:26 AM