Should you trust ACS presidents on jobs? I don't think so. 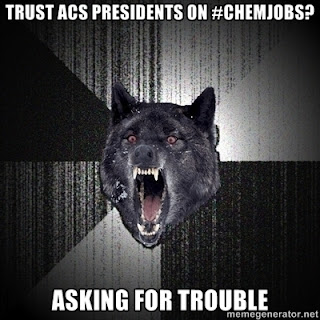 It's a little unfair to ask ACS presidents to be completely versed in the data on chemistry jobs -- but just a little sensitivity might be called for. In a reddit thread on chemistry jobs advice ("What is the chemistry job market like in the US?"), a graduate student chimes in with a real winner:


The job market for PhD Chemists is really good. I had an opportunity to speak with a former president of the ACS not too long ago. He cited the fact that unemployment for PhD chemists did not really change much even during the Great Recession (unemployment stays pretty much around 3-4% for PhD chemists). (emphasis CJ's) All of my colleagues that have defended have gone on to terrific jobs in industry and government.

Starting salaries for PhD Chemists, especially those with an organic background, start around $80-90k and is highly dependent on region. For more information, you should visit the ASC [sic] website and read their annual reviews. There is a job security risk if you are in the industry, but the jobs in government and academia make less money and come with good security.

In a completely separate arena, longtime CJ favorite Virginia Postrel links to the blog in her article questioning urges to push college kids into the STEM arena:


The commentators excoriating today’s students for studying the wrong subjects are pursuing certainty where none exists. Like the health fanatics convinced that every case of cancer must be caused by smoking or a bad diet, they want to believe that good people, people like them, will always have good jobs and that today’s unemployed college grads are suffering because they were self-indulgent or stupid. But plenty of organic chemists can testify that the mere fact that you pursued a technical career that was practical two or three decades ago doesn’t mean you have job security today.

And in the comments, this gem:

Email ThisBlogThis!Share to TwitterShare to FacebookShare to Pinterest
Labels: ACS inside baseball, musings, which one of you idiots was it?