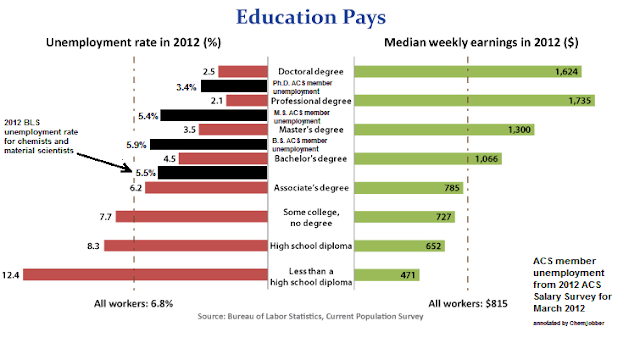 As you can note, chemists come out worse in every single apples-to-apples comparison on all equivalent degree holders. (I'll do the salary numbers at some point soon.)

I've been trying to figure out for a while what "recovery" looks like -- so this is one of the key markers, I think. Recovery will be when our numbers are not consistently higher than "all" degree-holders.

Best wishes to all of us.

*Not all chemists are ACS members, the survey has a very low response rate, etc., etc.
** The Current Population Survey only surveys 80,000 households -- what's the chances of a representative mix of chemists in there?
Posted by Chemjobber at 12:15 PM