A recent Organic Process Research and Development paper comments on the capabilities of the Lasentec focused beam reflectance measurement (FBRM) tool and how it is used in crystallization processes of pharmaceutical compounsd. It mentions the problem of "bearding", which is a crystallization term that I was not aware of. Adlington et al. [1] define it as such:


"The following campaign saw the appearnce of a rim of solid at the solvent level knows as a beard."

They reference another OPRD paper from 2006 [2], which talks about a beard, and how it was affecting the purity of their crystallization by forming the incorrect polymorph: 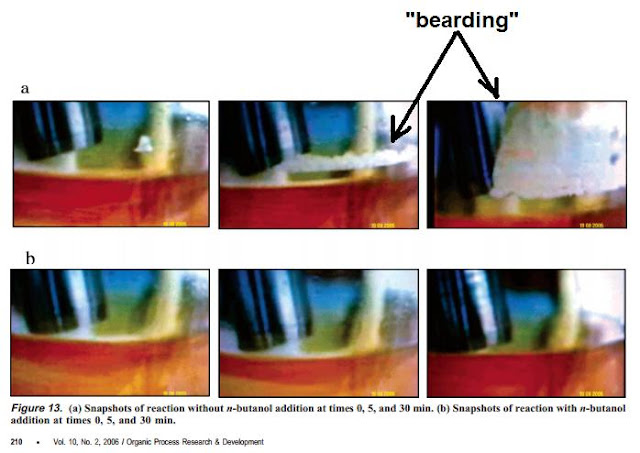 The apparent reduction in MSZW was traced to fouling of the reactor wall (“bearding”) by AG035029. This spontaneously nucleated “beard” was Form A (Ostwald’s rule of stages), and the spurious contamination of the batch by this material resulted in bulk crystallization of Form A. The beard fouled the batch in one of two ways: by seeding the batch prior to the intentional Form B seeding as shown in Figure 11a or by overriding the Form B seeding. This latter case was observed by FBRM as a secondary seeded nucleation event (Figure 12).

The fouling of the glass wall stems from strong adhesive forces between the glass surface and AG035029. While adhesion of material to a glass surface can be attributed to several factors including surface roughness and contact angle, hydrogen bonding, or van der Waals interactions, the most likely candidate in this case was thought to be hydrogen bonding, as the chemical structure is rich in this component. To overcome the adhesion between the carboxylic acid and the hydrophilic glass surface, a high-boiling solvent was required that could provide an alternate source of hydrogen bonding, such as a longer-chain alcohol. The former requirement would ensure the liquid composition at the meniscus would be rich in the alcohol component and essentially trap the API in the solvent mixture.

Figure 13 shows snapshots of the reactor wall with and without the addition of n-butanol. In the top row, the fouling progresses until the entire surface above the liquid is covered in Form A that spontaneously nucleated whereas in the bottom row, the area above the level of the liquid is clear throughout the entire experiment. Accordingly, 9 vol % of n-butanol was added to the reaction mixture, and this successfully eliminated the bearding effect.

I wasn't aware that this phenomenon had a name, but I've sure seen it a lot!