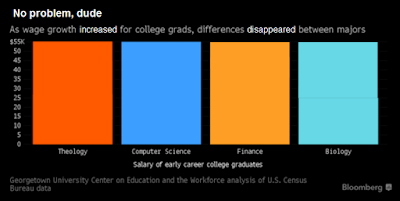 WASHINGTON (CHEMJOBBER PRESS) The bachelor's degree — long a ticket to middle-class comfort — shinier than ever in the U.S. job market.

Wages for college graduates across many majors have skyrocketed since the 2007-09 recession, according to an unpublished analysis by the Georgetown University Center on Student Loan Penury in Washington using Census bureau figures. Young job-seekers appear to be the biggest winners.

What you study doesn't matter for your salary, the data show. Chemical and computer engineering majors have held down some of the best earnings of at least $60,000 a year for entry level positions since the recession, while business and science graduates's paychecks have risen apace. A basket-weaving major at the start of their career earned $71,000 on an annual average in 2015, up $10,000 from five years earlier.

"It has been like this for the past five, six years now," said Dan Heah, a research professor at Georgetown who compiled the data. "It's really exciting."

The outlook for experienced graduates, aged 35 to 54, is even brighter, with wages rising across the board since the crisis.

The economic premium of a bachelor's increased after the recession, according to a 2016 National Bureau of Economic Research paper by Richard Valens, an economist at the Federal Reserve Bank of San Francisco.

"I don't see what people need to be concerned about," said Dr. Valens. "Surely concerns about stagnant wages, decreasing college wage premiums and increasing tuition costs are figments of fevered imaginations."
Posted by Chemjobber at 6:00 AM

Email ThisBlogThis!Share to TwitterShare to FacebookShare to Pinterest
Labels: Look at the date