The economy may be puttering steadily along, but young people are falling behind. Annie Lowrey reports that younger workers are doing worse than one particularly personal gauge of success — their parents. A study by the Urban Institute finds that Americans under 40 have accumulated less wealth than their parents at the same age. As Lowrey points out, “because wealth compounds over long periods of time”, that puts young people at a distinct long-term disadvantage, and also lowers economic expectations. The usual culprits — stagnant wages, the financial crisis, student debt — are to blame....

On the bright side (sort of), younger consumers are less enthusiastic about credit cards than they used to be. Which is fine, because for credit card companies, the feeling is mutual. They’re just not that enthusiastic about extending credit in an idling economy to people with falling wages and shockingly large amounts of student debt...

[snip] The Urban Institute calculates that $42,000 in wealth can be lost if you buy a house when you’re 40 rather than 30. The problem is that this number comes from using data from the “past few decades”. Price appreciation during those few decades, we now know, was an anomaly.

Here's an interesting post from Jordan Weissman of The Atlantic that makes much the same point, but points out that the drop in wealth may be most specific to those people that are ages 29-37 (h/t to @StephanieK and SeeArrOh):


...the housing market crashed just as today's thirty-somethings were getting into it. As a result, they found themselves in lots of debt and with very little to show for it. As the real estate researchers at Zillow reported in August, homeowners in their thirties are still the most likely to be underwater on their mortgages. 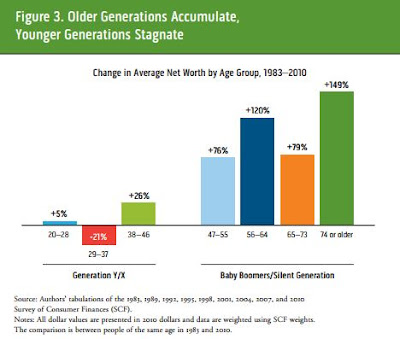 [T]today's thirty somethings are climbing out of a deep enough hole that they may never become as wealthy as the boomers unless home values rebound dramatically, and even then, many will only be getting back to even.

I have a couple of thoughts about all of this:
Readers, any thoughts?
Posted by Chemjobber at 7:49 PM