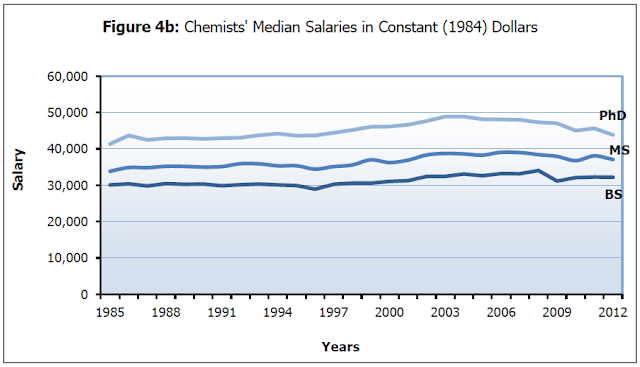 The accompanying text is oh-so-reassuring as well:

Keep in mind that the median represents the salary in the middle of the range. Most chemists reading this who were working in 1985 were probably just starting out and were most likely making a salary in the bottom quartile. Today, those same chemists are likely to be making salaries in the top quartile and they have accumulated a substantial gain in buying power even in 1984 constant dollar terms.

Gosh, I hope they're right.  (Who's the culprit here? Is it inflation, the decline (in relative terms) of American chemical/pharmaceutical manufacturing, the change in business culture (i.e. worker salaries flat, management salaries up?) I wonder how this looks for other fields.)

UPDATE: Respected reader Polychem points out that the 2012 Salary Survey report also includes a section on consulting wages (page 12), all of which are a good bit higher than $25/hr.
Posted by Chemjobber at 11:56 AM