In a recent blogpost, Catherine Rampell of The New York Times notes that the unemployment rate for recent college graduates is uncomfortably high, but not when compared to high school graduates*:


As you can see, the unemployment rate for people in their 20s with college degrees or more education was 5.7 percent (for those whose highest credential was no more than a bachelor’s, the number was 5.8 percent). For those with only a high school diploma or G.E.D., it was more than twice as high, at 16.2 percent.

Ms. Rampell gets these numbers from a recent Bureau of Labor Statistics report by Thomas Luke Spreen, it looks at recent college graduates: ("respondents who report they received their degree in the current calendar year") in October of each year from 2007 to 2011.

Looking through the report, it's not exactly a rosy picture. From the conclusion:


The data collected in the CPS School Enrollment Supplement show that 74.5 percent of the 2011 cohort of recent college graduates were employed in October 2011 and that their unemployment rate was 12.6 percent. The employment–population ratio and unemployment rate of recent college graduates were similar in 2011 and 2010. Generally, recipients of advanced degrees were more likely to be employed than those who received bachelor’s degrees.

For comparison, the unemployment rate for all college graduates, 25 and over in October 2011 was 4.4%. I found this chart (below) in Mr. Spreen's chart to be really sad, especially when you think about young graduates in chemistry: 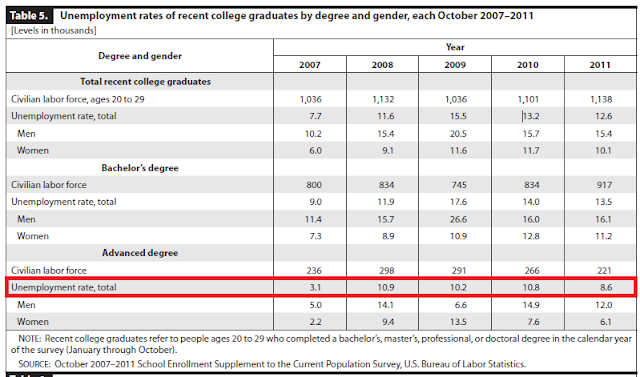 The jump between 2007 and 2008 (around the time I was looking for work) to be remarkable -- that's basically an entirely different world of unemployment rates. (I wonder what that would look like for young chemists? The data isn't there, I don't think.) It's nice to see things trending down, though.

*Isn't it time for us to stop comparing data for college graduates against non-college graduates, especially in the "should people go to college" debate? They're just terribly, terribly different groups of people, I think.
Posted by Chemjobber at 12:09 PM