From an article in the Wall Street Journal a couple weeks ago:


The worst U.S. recession since World War II has also had the weakest recovery.

The nation's economy has grown 6.7% since the recession officially ended in mid-2009, according to revised data released by the Commerce Department Friday. That is slower growth than earlier data suggested and makes it the worst three-year recovery in the postwar period. The current recovery is weaker even than the moribund rebound that followed the 1980 recession, when the economy eked out 7.2% growth over three years despite falling back into recession for 16 months. And the 1980s recovery was followed by several more quarters of robust growth, a feat the economy shows no sign of repeating this time around.

I'm not encouraged when I see the following little tidbit from the American Chemistry Council (the trade association of the chemical industry); they've released the "Chemical Activity Barometer":


American chemistry is essential to the U.S. economy. Chemistry’s early position in the supply chain gives the American Chemistry Council (ACC) the ability to identify emerging trends in the U.S. economy and specific sectors outside of, but closely linked to, the business of chemistry.

The Chemical Activity Barometer (CAB), the ACC’s first-of-its kind, leading macroeconomic indicator will highlight the peaks and troughs in the overall U.S. economy and illuminate potential trends in market sectors outside of chemistry. The barometer is a critical tool for evaluating the direction of the U.S. economy.

...The CAB is a composite index which comprises indicators drawn from a range of chemicals and sectors, including chlorine and other alkalies, pigments, plastic resins and other selected basic industrial chemicals. It first originated through a study of the relationship between the business cycles in the production of selected chemicals and cycles in the larger economy during the period from 1947 to 2011. 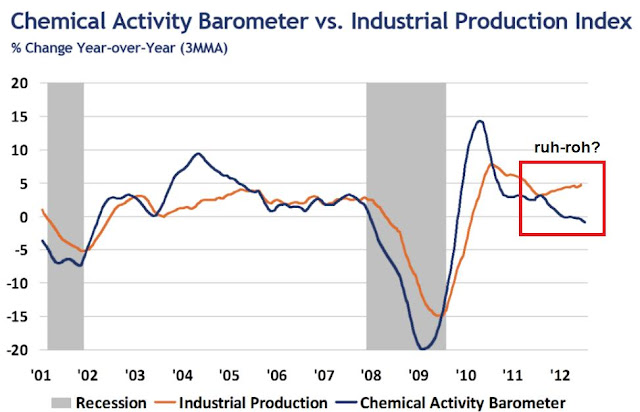 As you can see, there's definitely a downward trend for the CAB right now. Cause for concern? Hard to say. Paul Hodges, of course, says DOOOOOOOOOM.

Here's the CAB's long-term tracking; here's the official data sheet that goes along with it. I'm a little bit hesitant about these sorts of indices -- there's always a lot of noise and econometrics is an inexact science (Cue Keynes/Hayek video.)

Best wishes to all of us.
Posted by Chemjobber at 10:10 AM