In this week's C&EN, editor-in-chief Rudy Baum is rearranging his files, and came across an old issue bemoaning the relatively poor job market for chemists in 2003:

The Nov. 24, 2003, issue included C&EN’s annual “Employment Outlook” feature. The first story in the package of stories was titled “Slump Continues for Chemists: Unemployment is at a record high, but opportunities exist for the well prepared.” Sound familiar?

In her editorial in that issue, entitled “The More Things Change …,” then-editor-in-chief Madeleine Jacobs wrote: “The job market is as soft today as it was in the early 1970s,” when she began her career at C&EN. “Next year promises to be only marginally better than the past two years for graduating chemists.”

These are difficult times for the U.S. economy, and chemical scientists have not been spared the fallout. Unemployment for chemists--as measured by unemployment of American Chemical Society members--is at a record high. C&EN Editor-at-Large Michael Heylin reports that the jobless rate of 3.5% that the most recent ACS Salary Survey reveals as of March 1 this year is up from 3.3% a year earlier. It also exceeds the earlier all-time high of 3.2% set in 1972, the first year of this annual survey.

I hadn't really noticed that the previous all-time high was hit in 2003, which is a bit revealing. I seem to recall a bit of a slowdown back then. But what I think is most revealing is that it's apparent that the breakdowns between industry and academia used to be released: 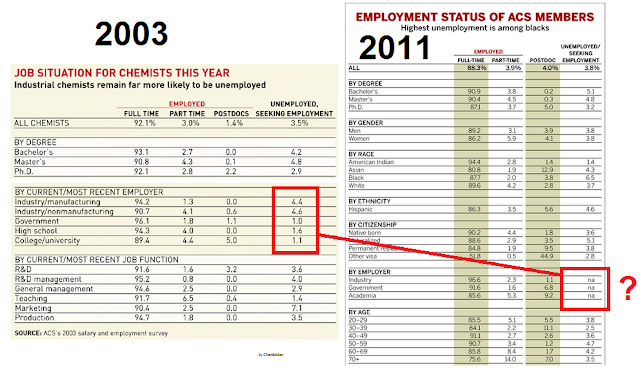 I wonder why those breakdowns aren't released anymore. I need to check this out.
Posted by Chemjobber at 10:48 AM